An open letter to David Carr of the New York Times

It's too bad you took what should have been a moving profile of Jessica Ann Ellis and turned it into a journo's whine-fest.

Coverage is down on Iraq because American troops are bleeding less, and for no other reason. If Americans were bleeding more, it would be right back on the front pages. And every reporter knows this.

Further, you wrote of American indifference to a "war that refuses to end.' Curious construction, that. But you need to get out more: The American public isn't indifferent to the war. We're indifferent to your crap coverage of the war. And that's a huge difference. Your very own newspaper once described a soldier's decoration as a "Purple Star," and ascribed the Medal of Honor to an award presented to songwriters.

And your own reporter, Alissa Rubin, who hilariously wrote earlier this month that "It's not clear who won" in Sadr City, has got to take the cake for being the dumbest journo in the country. (She's an ok reporter, if she sticks to reporting. But when she tries to do analysis, or editorialize, she's way, WAAAAAAY out of her depth.) (I'm assuming it's the same Rubin, here, but if someone knows I'm wrong, let me know. The Times hasn't responded).

As for your own "analysis" of US casualties, just what in God's name are you smoking?

Here's what you wrote:

"But the tactical success of the surge should not be misconstrued as making Iraq a safer place for American soldiers. Last year was the bloodiest in the five-year history of the conflict, with more than 900 dead, and last month, 52 perished, making it the bloodiest month of the year so far. So far in May, 18 have died."

But a casual glance at this graph of US deaths in Iraq, by month, establishes that you've been practicing the fine art of lying with statistics. 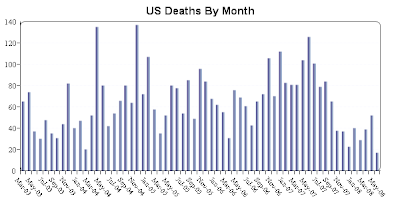 There is no doubt, based on these numbers, that the tactical success of the surge HAS made the country safer for US troops. Deaths have been cut to roughly half of the rate of last year, and the rapid falloff in casualty rates since about November of 2007 is obvious. Jeez...last year was, you guessed it...LAST YEAR, and half of that year had elapsed before the surge elements were fully operational in the summer of 2007. Furthermore, you mention the 18 deaths so far in May, as if that supported your conclusion. But May is on track to becoming one of the safest months for US troops since our arrival in 2003. Why did you include it?

I believe a correction is in order.

Unfortunately, I have less faith in the NY Times to publish that correction than for any other newspaper.

I'm sorry Corporal Ellis' memory had to be sullied by association with your piece.

[CLICK HERE TO ENTER THE NET] posted by Jason : 13:03 EST, Monday, May 26, 2008 12 transmissions this net
Comments:
Did you know that life was always better under Saddam?

Bit creepy that the Times is slumming with Salon and picking up these miscreants as readers, eh?

Somebody replied to the thread... Followed up with another fly in the ointment.

Good catch on the Auschwitz fumble.

What I can't understand is how these same media outlets, but especially the NYT tout the GC so often and then they put up video of a soldier being hit by sniper fire before the family was notified... and that is a specific violation of the GC be it in a war zone or occupied territory. Yet we never, ever, not once, hear about journalistic responsibility to abide by the GC although it does cover conflicts including civilians.... With the pertinent pieces being Conv. IV, Part I, Art. 5; III,III,68; I, II, 12-13 & 17. Time to allow proper authorities to notify family and respect for wounded and dead are paramount in the GC, yet NYT and CNN have not abided by it. I lost all respect for these two outlets some time ago because of their lack of ethics and not conforming to civilized rules of reporting during wartime. I don't call them The Volunteer Fifth Column without reason.

As vile as the Times and its ilk are, don't worry: We will win in Iraq.

John McCain will be the next president, and he will make sure that there's no surrender in Iraq.

Even if Obama wins--and he won't--remember that Paul Kanjorski (D-PA) just admitted publicly that the Dems never had any intention of surrendering in Iraq. They only said that so their idiot followers would be happy.

So either way, the troops and their families will not have sacrificed in vain.

In all the wars of the 20th century, only in WW1 was the Geneva Convention followed by our enemies. In wwII the Japanese tortured, starved, and executed our prisoners of war as did the Waffen SS, although not the Wehrmacht.

In Korea, the North Koreans and the Chinese, tortured, brainwashed, and executed our POWs.

The Jihadis, the Iranians, and Hezbullah have never practiced anything close to the Geneva convention. They have murdered their prisoners and desecrated their remains.

When, oh when, will America make sure these bastards reap the whirlwind they have been so continuously sewing.

You missed my favorite line in the Carr article:

"Hollywood producers who had hoped there would be a public interest in cinematic perspectives on this war have been similarly punished."

Far too many people have paid to see this junk. If Hollywood loses money on their treasonous crud, that will be far less punishment than they deserve, but the only kind they will receive.

FatMan, they aren't going to lose money. The foreign market is bigger than the domestic one, and they eat treasonous propaganda up with a spoon.

Outstanding post. The NY Slimes will never acknowledge it but you took them to the woodshed and into the woodchipper.

I am shocked. I thought The Times went out of publication. I had not idea it was still around. With its circulation drops, give it another 3 weeks.:)


Note to Carr: Fayetteville can be a dangerous place to be a soldier, too.