Battle handover in the operational and demographic context

The rate at which battlespace is being handed over to the Iraqis themselves is accelerating.

Here's a map depicting Iraqi areas of responsibility back in September: 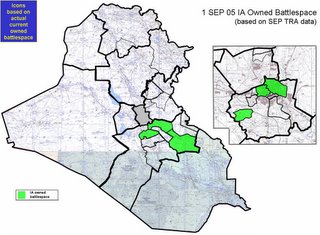 And here's one depicting Iraqi areas of responsibility from last month: 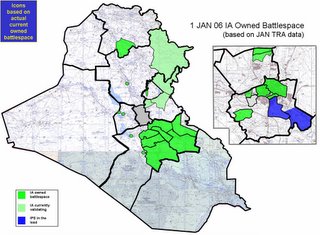 (Ok, you need at least three data points before you can establish an accelerating trend. But this is still good to see.)

A couple of points to contextualize the information:

Much of Iraq is an utter desert wasteland, particularly in the west. Once you pull a mile or two away from the Tigris and Euphrates rivers, the population density falls to almost nothing in many parts of the country.

The Iraqi areas of responsibility are largely population centers. Compare the green-shaded areas above with this 1993 map of population densities: The security burden currently borne by the Iraqis, then, is much greater than the square mileage would suggest. Further, the US footprint as perceived by the average Iraqi is getting smaller, and the US presence less and less disruptive.

It doesn't surprise me that US casualties have been on the decline recently for these reasons.

The process of expanding the Iraqi Army, I believe, will accelerate, since the units currently on line will serve to train a corps of professional officers and NCOs who will form the backbone and character of newer units. They themselves will create leaders in their mold, and the process will accelerate exponentially.

It makes sense for Americans to maintain responsibility for much of the rural areas for the time being, because US aviation counts for more in these areas, and it is easier for the US to bring its superior firepower to bear in the countryside. For this reason, of course, insurgents will not seriously challenge us in the countryside, if they have a choice. But will concentrate their operations in the city - and against the Iraqi army, against whom they can still operate with something closer to parity. I think it's obvious that we're already seeing this happen.

It's interesting to me that they did seem to prioritize a presence in the northeastern corner of Iraq, along the Iranian border. I don't know whether to read that as a credit to Kurdish progress, or the perception of a serious threat of infiltration from Iran, or the perception that the threat of infiltration from Iran is NOT serious - in that sector, anyway, and so a local security force is fully capable of addressing it. It could just be a function of the higher population densities there. Really, I don't know what to think.

I suppose there are elements working behind the scenes to ensure that Kurdish security forces - which already had a huge head start - do not rocket too far past the units from the rest of Iraq. If they did, the temptation for Iraqi Kurdistan to declare its independence would grow stronger. And the issues of resettlement will be a problem for a generation or more to come. Just another piece of Saddam's awful legacy.

Watch how the maps turn green, and compare that with an overlay of population centers. This is the fruition of the operational approach so superbly illustrated by Bill Roggio.

(Remember about watching those cities turn from Red to Blue? As I wrote back in October:

Roggio's grasp of the difference between a sweep operation and a clear and hold operation is key - and it's an aspect of the conflict that traditional media outlets have across the board failed to understand.

Watch the graphics. Watch how the red blips - representing towns in which coalition forces could not keep a robust security force on station to combat the insurgents - turn blue. The blue blips don't represent sweetness and light. But they do represent towns where pro-Iraqi forces have taken ground, are consolidating gains, and are now developing their own human intelligence networks with which to take the fight to the enemy at the time and place of our own choosing.

This does not mean that fighting will end tomorrow. The blue blips don't mean guerrilla resurgence is impossible. The insurgents can elect to concentrate their forces anywhere they think they can get to.

But it does mean that they will have to try to do so, and to consolidate and leave a healthy footprint in areas where Iraqi forces have set up increasingly strong and credible intelligence networks of their own, and it will be increasingly difficult for insurgents to concentrate in strength, undetected. Out-of-towners, especially foreigners - stick out like sore thumbs in Iraqi neighborhoods, and every time they try to gather 100 people or so to pick a fight they run the risk of exposing themselves.

It's all coming together.

[CLICK HERE TO ENTER THE NET] posted by Jason : 00:34 EST, Saturday, February 11, 2006 5 transmissions this net
Comments:
I have a question about training the Iraqis. How come it is taking so long? A great many Iraqi army vets should have at least some basic infantry skills, so what's the deal? Why is it taking 2-3 years? In about the same amount of time, from 1942-44, the US went from essentially no army to an army capable of crushing the Wehrmacht. And right now we're not even asking the Iraqis to take on a task that is as challenging as that...

The command force structure of the old Iraqi army basically guaranteed a slow build-up process when fitting them to a more Western structure, particularly US structure.

There was not much delegation of decision-making from the top in the old structure, no solid NCO group able to adapt and make credible decisions without going to top commanders. It is a major paradigm shift to get Iraqis to suddenly act more on their own rather than wait for a top commander to tell them what to do.

Thus, we are not just re-training Iraqis to use weapons and kill the bad guys, we are redefining an entire command system and culture. This task is incredibly bold and showing incredible progress given the short timeline we have worked with so far.

You should read how long it took NYC to take back many of its neighborhoods through a police force system change. Through a series of small wins leading to bigger wins, NYC under Giuliani's leadership became one of the safest large cities in the world.

In context, I believe the process in Iraq has been quite quick although detrimental mistakes were made in the first year in terms of retraining and deployment of Iraqi soldiers and police.

"You need points to demonstrate an accelerating trend"

The first point is zero. I'm pretty sure the first piece of Baghdad was turned over in March 2005.

Anonymous wrote: "I have a question about training the Iraqis. How come it is taking so long?"

No doubt Jason can answer your question better than I. But I'll offer my post on George Packer's new book The Assassin’s Gate. It appears that it was nearly two years post-liberation before a viable plan was developed to put the focus on the Iraqi security forces.

Ever since I was a little boy, I had a thing for playing sports. It is funny, as you get older, your passion does not change, just the injuries.

Thanks for the info.