As if to underscore the notion that liberals can't even cover the smallest subjects without lying about them, here's Talking Points Memo on the photography of US dead and dying soldiers and marines in the War on Terror:

Yesterday, War Department Secretary Gates excoriated the Associated Press for publishing a photo the the dying Lance Cpl. Joshua M. Bernard in Afghanistan (above left). WTF! For those of you with short memories or who were not alive in 1968, I can tell you that photos of dying American soldiers in Vietnam were a regular part of the day's news. 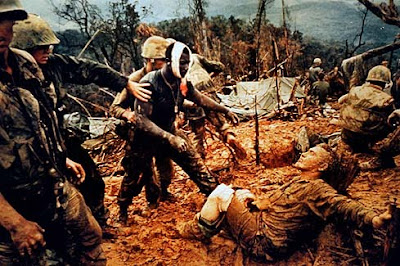 The photograph, taken in 1965 or 1966, I believe, by Time Life's Larry Burrows, was one of the most famous photos of the war. Here's the lie: No one in the photograph was dying.


One commenter, Ripper McChord, has it about right:

A Marine's life belongs to the country. His death is his own. I've interviewed th parents of dead servicemen and this is a personal grief that only Gold Star families know.

A right to watch his last minutes?

No. certainly not. Perhaps a privilege--if he or his parents so allowed, but they directly asked for privacy.

A duty to watch his death? Only if your a voyeuristic moron who's never seen a car accident or watched "Saving Private Ryan." Can anyone really say that encroaching on the sacred sacrifice this young man made actually shows them something they haven't seen in a thousand horror movies or enlightens the public debate one iota? Like hell. If that's your argument, you're just mirroring the anti-abortion activists who put photos of bloody fetuses on billboards for shock value and politics.

Lance Cpl. Joshua M. Bernard was a human being who volunteered to serve you and me. His life and death deserve more consideration than crass political sport.

That said, I do not support a blanket ban, imposed by our government, on publishing images of dead and dying troops. Such images have been a part of war reporting since the camera appeared on the battlefield, and unpleasant and gruesome as they are, I believe that the images taken of dead soldiers at Gettysburg, Petersburg, Fredericksburg, and later and famously, the photos of American dead on the beach at Buna should be part of the record.

The SecDef should confine his efforts to the pursuit of war, not telling journalists what they may or may not publish. There should be narrow exceptions made in order to protect operational security and to protect the integrity of the family notification process.

[CLICK HERE TO ENTER THE NET] posted by Jason : 20:14 EST, Saturday, September 05, 2009 4 transmissions this net
Comments:
Liz Trotter this morning on FNC: A major difference in use of war photos since at least WWII is that they took great pains not to include personally identifiable aspects of a photo of the dead that gets published, sometimes air-brushing them out, others by selecting photo angles that omitted them (like the photos of Buna you link to).

Yeah, that's true. And I think that's usually a good thing. But look at it more broadly -- there are images from the Holocaust that are haunting especially because the faces of the victims are visible... and I'm glad that Frank Capra's famous photo of the man getting shot in the head during the Spanish Civil War is part of the record. Ditto for that VC scumbag getting shot by the Saigon police chief.

The image of that naked girl fleeing a (Vietnamese) napalm strike would not have been as effective had we not seen her face.

I think if you let slip the dogs of war, you can't get mad if they make a mess on your pretty lawn. But common decency dictates that deference be given to the wishes of the family.

Perhaps if recognizeable images are taken, then all royalty proceeds of the photos and any articles they accompany should go to a fund for the children and families of fallen servicemembers, or to the families themselves.

Has the SecDef actually told journalists what they can and can't chalk up, though? From what little I've heard, he's given the AP a piece of his mind and said what they did was morally objectionable - not illegal or a threat to security per se.

Is there an argument that this kind of thing makes grunts generally distrust the press?

I think that there is no question that this kind of thing makes grunts distrust the press. No question at all.